Many countries and cultures worship animals as gods. For instance, cows are considered a holy animal in Hinduism and it is illegal to slaughter them. The white elephant is believed to have the soul of a deceased human in Thailand. The Lord Ganesha of India has the head of an elephant, while Korean folklore considers the tiger as a guardian who will protect them from evil and bring good luck. 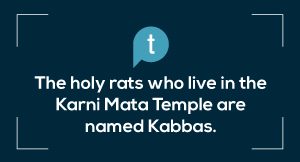 There are many animals held in high regard around the world, but you may be surprised to hear that there is a temple for the worship of rats. Rajasthan, India is home to Karni Mata, a temple dedicated to the goddess Karni Mata, a 14th-century matriarch. The legend says she made a deal with Yama, the god of death, to revive a dead clansman. Yama finally relented and allowed the deceased and all of Karni Mata’s clansmen to be reincarnated as rats until they are born back into the clan. Another version of the story is that 20,000 soldiers deserted a battle and, if found, would be put to death. They were turned into rats and found protection in the temple.

Either way, approximately 25,000 rats now enjoy their spoiled life, protected and cared for at the temple. Devotees travel great distances to pay their respects to the rats and receive blessings at the temple. The rats are fed milk, sweets, grains and coconuts every day. It is a great honor to eat the food or drink that has been sampled by a rat or to have the rats run across your bare feet. Many pray for the opportunity to see a rare white rat at the temple. Spotting them is considered to be the highest blessing as they are believed to be Karni Mata and her sons. Despite people’s fears of rat-borne diseases, no one has ever become sick from visiting the rat temple.