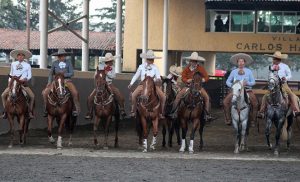 On Thursday, December 1, “La Charrería”, the equestrian tradition in Mexico, was added to the UNESCO´s List of the Intangible Cultural Heritage. It took eighth place among cultural institutions which are alive in Mexico.

La Charrería is a national event celebrating excellence. The criteria taken into account for the declaration included the transmission of values, such as family unity and respect. Since the entire family usually participates in the different activities, it is a way of life. These bonds of union create community while following customs and traditions.

The origin of the national sport of the same name can be found in work done on farms during the era of New Spain. The horse, introduced by the Spaniards, was the ally of the charro (cowboy) for herding, driving and roping cattle on large properties. Spanish, indigenous and mestizo customs contributed to the emergence of this national sport. It has become a symbol of Mexican popular culture and, like the charro, represented many times in film as an example of “Mexicanness”.

The charreada is a competition that is carried out in a lienzo charro, which consists of half a bull ring. It is carried out on the weekend, beginning at noon, with a series of suertes which are challenges performed by the charros, that will get a score from the judge. Charros created different types of rope, and this is where we get different suertes (the moves they make with the ropes). The charro costume is used during these events, although it is also used for special events, galas and ceremonies. There are even some who wear it with pride on their wedding day.

Women also participate in what are known as escaramuzas (skirmishes), wearing broad dresses that reach the ankle, with great colorful frills, boots, and hats. They perform a kind of choreography while mounted on their horses.

An important part of this festival is the mariachi music and the wind band. The public that attends this event can usually be seen dressed in jeans, boots, hats, and checkered shirts.

Today many families live this tradition as a part of their daily life. Currently, there are around 1000 Charro associations throughout the Republic. It is a celebration where the identity of Mexico comes alive.

It is worth noting the hard work by individuals to have UNESCO declare la charrería to their list. Among others, many thanks to the recently deceased secretary of culture, Rafael Tova y de Teresa, who did so much for the preservation of Mexican art and culture. We would like to extend our condolences to his family. Rest in peace.

3 Basic Steps for Building Your Home in Mexico