All good parties need to have a very a big ending: an extravaganza of fireworks! 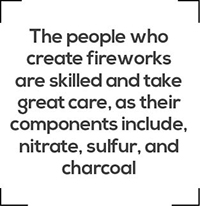 They are not only used for the annual celebrations that commemorate Mexico’s independence. They are used throughout the year and the country, in villages and cities. Fireworks form an important part of the festivities that honor the patron saint (or the virgin) of the town.

This popular art expresses itself in many ways: with the famous toritos, figures of cardboard in the form of a bull, a legacy of the Spanish; and with structures made of reed, holding the fireworks which spin with large white lights and colors. The figure is carried by a person who runs around the streets while people look on amused and somewhat concerned that the person who is carrying it will burn himself. This is a highly anticipated moment at these festivals.

There is another moment that makes use of this Chinese invention made of gunpowder, which is used both to destroy and entertain. It takes place on the last day of the festivities. Around 10:00, villagers gather in the plaza or main square of the town enjoy the “Castle”, which is nothing more than a tower made of wire and reed. It is approximately five to ten meters high, and it contains rockets and circular structures that light up, ascending each level before reaching the top for a spectacular closing that lasts several minutes. The sky is filled with exploding fireworks of white light and colors that illuminate the night.

The main producers are the central states of the country, such as the state of Mexico. An example of these are the artisans of San Pedro Tultepec and the town of Almoloya de Juarez, where it is a family business. The people who create fireworks are skilled and take great care, as their components include nitrate, sulfur, and charcoal, along with other chemicals and minerals.

It is definitely a very explosive art!