The Mesoamerican Barrier Reef is the second largest barrier reef in the world and is located in the western Caribbean. It starts in the south of Mexico and goes through Belize, Guatemala and Honduras, which means that the coral reefs we get to see while snorkeling around the Riviera Maya are part of this giant system. Sadly, the reef has been impacted by all four 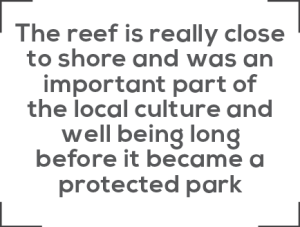 countries it covers due to overfishing and urbanization for tourism. When we have vulnerable and threatened ecosystems such as coral reefs and mangroves, one way to protect them is through marine protected areas, areas that are regulated (ideally) to lessen the impact on its ecosystems and resources. When the regulations are implemented, the ecosystems they protect have a better chance of recovering from damage, of being in balance as they used to be, and to be more resilient to changes such as climate change. In and around the Riviera Maya there are a few protected areas such as the Puerto Morelos Marine Park which has been in place since 1998.

The reef is really close to shore and was an important part of the local culture and well-being long before it became a protected park. It must be said that it is always complicated to find a solution that suits all stakeholders and also conservation, and no management regulation will ever be perfect. However, this park has managed to preserve beautiful reefs and plenty of marine wildlife that are now supporting a large tourism industry. The Puerto Morelos Marine Park is like an oasis of colors and life, particularly when compared to many reefs around it which are running out of color. Some of its reefs still hold colonies of endangered species of corals that have declined in the rest of the Caribbean.

This oasis of wildlife will only stay like this, and support the tourism industry, if fiercely protected from overuse from tourism and from surrounding threats such as polluted waters from the town, hotels building artificial reefs right next to endangered species of corals, or eliminating the very mangrove system where the park’s reef fish babies grow.

In the spotlight – Rincon del Buzo