Animals in the sea become part of a cycle when they die just as they would normally do on land. Although what exactly happens to them depends on what type of animal it is and where it dies. 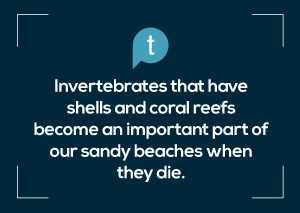 For example, sandy beaches are made of many things like material weathered from rocks located inland, but also from shells and hard parts of marine animals. Invertebrates that have shells and coral reefs become an important part of our sandy beaches when they die. After a while, they break down into small pieces becoming part of the sand that accumulates over time forming beaches. Hence why taking shells as a souvenir is not allowed in national parks or marine protected areas.

When a marine fish dies in coastal waters, it usually decomposes by bacterial actions pretty quickly as coastal waters are full of life. If it dies in a coral reef system it would quickly become a snack for a larger fish or for smaller critters (crabs, worms, shrimps) that hide in the reef’s cracks. Decomposing marine animals don´t last long in coastal waters. If a large animal like a whale dies near coastal waters, it is common to see many animals feeding from the carcass – it becomes a source of food for birds, sharks or even wolfs and bears when beached. The carcass disappears in a relatively short period of time.

But what happens to larger fish like tuna or animals like whales when they die in the open ocean? In the middle of the ocean (as opposed to coastal waters) there are fewer scavengers. These large animals float on the surface for a while due to decomposing gases and as the carcass sinks and reaches deeper waters, the temperatures get lower and the pressure increases helping the carcass to stay relatively untouched for a longer time while falling. When they sink, they get all the way to the bottom of the ocean where they become a source of food for entire communities and supply the sustenance of many species of deep-water animals for long times, even decades! Interestingly, similar communities can be formed in deeper waters when other living things sink such as beds of kelp or large trees fall to deep waters. 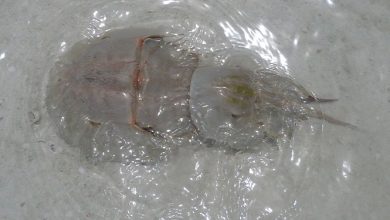