Little is known about the lives of couples in the old pre-Hispanic era and even less about their sexuality. This in part because our ideas of love and infatuation are very modern western concepts. 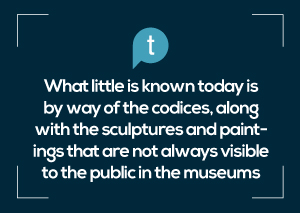 However, we do know about a plant called toloache, which was known for its ability to make someone fall in love by creating a hallucinogenic effect that removed the will of the individual. It is said that they would “fall foolishly in love.” Taking this plant in large doses can be very harmful, and even cause death.

We also have records of their marriages and the kinds of gifts that both families of the bride and groom had to get for the famous dowry. This type of practice is still followed in many of the small towns of Mexico, where the celebrations for the happy newlyweds can last up to a week. Often all of the people in the town are invited.

According to the records of Sahagún, large recommendations were made to both the bride and groom. She was asked to be demure, to attend well to her husband, to the chores of the house, and to not commit adultery. While the male was told not to mix with too many women before marriage, in order to conserve his male energy and not provoke his wife to commit adultery.*

As for sexual practices, there seems to be little information. This is possibly because it was destroyed. What little is known today is by way of the codices, along with the sculptures and paintings that are not always visible to the public in the museums. That is to say, this part of the lives of our ancestors remains hidden.

However, there does exist a phallic sculpture made by the Maya. In this and other cultures there are paintings where the gods are shown in various positions – if not explicitly like the Hindu culture – there are nude scenes showing full front sexual organs and/or sexual acts in progress.

Among the Mexican goddesses of sexuality are Xochiquetzal and Tlazoltéotl. One represents the love and satisfaction of the young and the other more is more fun and liberal. The Maya goddess Ixchel is the symbol of fertility.

Silla Móvil: Dance for your Senses