These events are happening more often and more intensely, likely as a result of increased nutrient loading from human activities in coastal zones 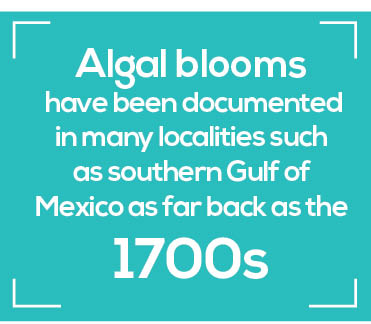 Large concentrations of aquatic microorganisms are called algal blooms, commonly known as red tides, although this term is used when caused by dinoflagellates. These microalgae can form dense and visible patches near the water’s surface usually in coastal areas. When caused by dinoflagellates the bloom takes a reddish brown color. Given that red tides are not really associated with tidal patterns and are not always colored, scientists prefer to use the term harmful algal bloom for harmful species, and just algal bloom for non-harmful species instead.

These algal blooms are not new, as they are seasonal events that result from coastal upwelling and movement of ocean currents. They have been documented in many localities such as southern Gulf of Mexico as far back as the 1700s. Although these are natural events, the use and abuse of chemicals (e.g. fertilizers for agriculture) and the pollutions produced by human communities is creating a problem (just like climate change). Algal blooms events are happening more often and more intensively likely as a result of increased nutrient loading from human activities in coastal zones. Why? Because the growth of microorganisms depends on the amounts and availability of nitrates and phosphates which are abundant in agricultural run-offs.

Some algal blooms have harmful effects because such a large amount of microorganisms concentrated in one spot can deplete oxygen in the water and many species create natural toxins. As a result, most visible effects of algal blooms are large mortalities of marine and coastal fish, birds, mammals and other organisms. Harmed wildlife such as dead fish were even mentioned in the records of Spanish explorers near Tampa Bay. Importantly, given that humans still consume large amounts of marine wildlife such as filter-feeding invertebrates (clams, oysters), the toxins of some algal can lead to neurotoxic shellfish poisoning in people who consume contaminated shellfish. So, it is important to be careful when harmful algal blooms are nearby, and reducing the pollution you produce is always a good way to reduce our impact on the planet. More info algal blooms on: ce.noaa.gov/hazards/hab/