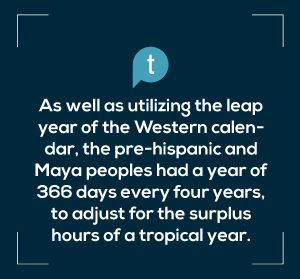 During pre-hispanic times, Mesoamerican people developed various calendars. Among them are the ancient Mayas, who are recognized as being great astronomers. Their study of astronomical phenomena was vital to understanding cycles, change, continuity and time.

The Maya managed to develop a very precise timetable that projected hundreds of years into the future, with an exact record of astronomical phenomena. It is based on a vigesimal numbering system, which allowed them to make very long counts in a not so complicated way. They also developed the concept of zero.

The Maya calendar consists of two accounts: the long count and the short account.

The long count is the solar calendar of 365 days that we all know and use. For the Maya, however,  is was 360 days, where a month (uinal) had a duration of 20 days (kin) and a year  (tun) was composed of 18 uinals. 20 tunes formed a katun and 20 katunes in turn made a baktun. By adding 13 baktuns we obtain the time or duration of an era. The days of the month or uinal were counted from 0, that is from 0 to 19.

The remaining five days were used by them to perform rituals to clean out the bad that could have happened and prepare for the new year.

As well as utilizing the leap year of the Western calendar, the pre-hispanic and Maya peoples had a year of 366 days every four years, to adjust for the surplus hours of a tropical year.

The other account, the short one, is a ritual or sacred calendar that unifies Mesoamerican peoples under this cultural element. It is 260 days and is known as the lunar calendar.

This calendar is of paramount importance because on the basis of their observations they developed an agricultural calendar. It perfectly marked the dates and periods of sowing, rain, harvest and preparation of the lands for a new cycle. This calendar not only marked the agricultural times but also the festivities, the rituals, the time of each their gods and the ceremonies dedicated to each one of them.

Mesoamerican villages were built around agriculture as the fundamental basis for their development, an idea that unfortunately has now been lost.

Low Season in the Service Industry

Discovering Art and Culture in the Riviera Maya