The first records of organized tourism with whale sharks are from Ningaloo Reef, Western Australia in the late 80s when local tour operators understood the seasonality and accessibility of whale shark aggregations. This animal is a shark and not a whale despite its name, and it is known to gather in some areas of the world where its main food source, plankton, also gathers. They are large animals reaching up to about 12 meters and weighing up to 21 tons! However, as they feed on tiny animals, they do not pose a threat to humans and tend to swim slowly while feeding. This is why whale shark tourism has become a success. 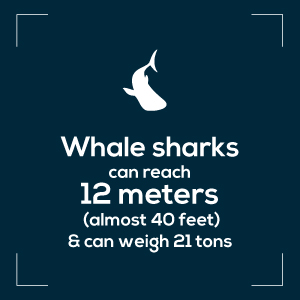 Many sharks are fished for liver-oil extractions, meat, and, more importantly, for their fins. Shark fins are used for a soup which is these days a demanded dish in some Asian countries and shark meat is consumed in many more countries and often sold as other fish. Sadly, sharks cannot keep up with intensive fisheries as they generally have very few pups, grow slowly and take many years to be able to reproduce. Whale sharks were fished too, but they are now globally protected, mostly thanks to the understanding of their high value for the tourism industry, alive rather than in soup or as fish and chips.

Nowadays, there are many spots where we can find whale shark aggregations like around Holbox and Isla Mujeres in the Mexican Caribbean, the Gulf of California (conservation), Honduras, Belize, Seychelles, the Maldives, the Philippines (conservation), or Mozambique (conservation). These activities have slowly changed the livelihood, and thus the awareness, of local communities as many of them used to fish whale sharks. However, their conservation is still a challenge. Wildlife tourism can still have a negative impact when management is uninformed and ineffective; when the rules are biased towards the economic side of the business; and whenever the few rules that are in place are ignored. If you swim with these beauties this summer, I suggest you do check out some best practices online here or here and do leave negative feedback on Tripadvisor of those companies that do not respect our beautiful and gentle giants.