The ancient Maya were not only great astronomers, and the builders of great pyramids such as Tulum, Chichen Itza, Coba, Ek Balam and so many others. They were also great traders and much of their trading was executed via rivers and their tributaries and, of course, the Caribbean Sea. 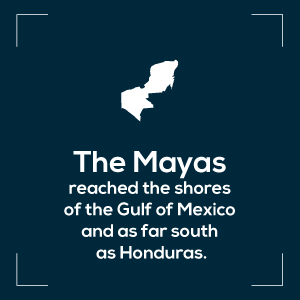 The Mayas reached the shores of the Gulf of Mexico and as far south as Honduras. They had a large commercial network with the peoples settled there, not only on the banks of rivers and coasts, but also with the cultures or nations developed within the territory. Among the ports of great importance are the ancient Polé (where the park Xcaret is located today) and where there are still remains of the buildings of that time. The other port is Xel Há, which today has also become a recreational park.

These Maya navigators had different types of canoes, according to whether they had to navigate by river or by sea, depending on the currents and obstacles. The canoes were made of hardwoods from a single trunk.

They marketed all kinds of goods like salt, grinding stones, cocoa, copper axes, metal products, ceramics, cotton fabrics and henequen. This included products from other cultures such as the Aztecs’ metal smelting instruments, thus proving contact between Mesoamerican peoples.

The Genoese explorer Christopher Columbus is said to have encountered a boat or “kayak” of Mayan traders near the Honduran coast during his fourth voyage. The canoes measured the length of a Spanish galley, 2.5 meters wide with a cabin in the middle. There were 24 rowers led by a captain.

Religion was also an important aspect of their commercial activity. Large pilgrimages were made to the island of Cozumel to the sanctuary of the goddess Ixchel, in search of her protection and for good fortune in business.

The 170th Anniversary of the Caste War