From July 20-30 in Playa del Carmen, the government, local businesses and the community came together to revitalize local spaces with street cleaning, waterproofing, public lighting, murals and sidewalks. Calle 4 bis, one of the first streets that existed on the beach, was neglected, and we wanted to lift the spirits there through murals and colors. 1,030 m2 of surface area was treated, including waterproofing. 240 liters of paint, 200 liters of waterproofing and 192 cans of paint were used.

How was the government involved in the project?

Urban Development provided us with painting materials and the Trust of the Riviera Maya and Cozumel supported us by helping the tourists get to know more streets of the city. The DIF supported us with the call for volunteers. 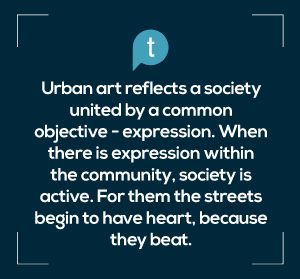 How were private businesses involved in the project?

They believed in the project from the outset; the media, restaurants, clothing stores, real estate agencies and hotels helped us with most things.

They are companies that want to leave their grain of sand where they offer their services and thank those who believe in change.

We invite the private sector to join causes such as Calles Corazon, with art as their engine, to increase the standard of living on the streets. An integrated society is a growing society.

How were local citizens involved in the project?

At first the neighbors did not want this; they did not believe that a group of citizens wanted to give life to the street through murals.

When the event began and the artists began to paint their facades, they invited us in to eat and drink, or they protected us from the sun, they lent us ladders and brooms and electric outlets. Now we know each other by name.

The participation of the community was of vital importance, not only in allowing us access to their houses to paint for 10 days, but in leaving indifference and apathy aside.

How many artists were involved?

At the beginning there were eight muralists; during the event more artists joined and we ended up with 15 murals.

How has the neighborhood benefited from this project?

It looks better. Households are better off as a garbage collection was made prior to the event. Children play in clean spaces as their homes and sidewalks (roofs, facades, lighting and waterproofing) have been restored. People walk down the street and experience social integration through art.

Where you want to be Married!