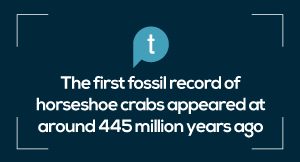 If you have walked on the shores of the Gulf of Mexico (for example, Holbox), you may have seen these weird-looking, brownish, rounded and kind of flat animals in the shallow waters. They are called horseshoe crabs as they look like crustaceans although they are not crabs, and they are more closely related to spiders. You would be looking at a ´living fossil´ because it appeared a long time ago and has had minimum change since. The first fossil record of horseshoe crabs appeared at around 445 million years ago – even before dinosaurs existed on the planet!

Horseshoe crabs are invertebrates, meaning they don´t have a spine. They also lack an inside skeleton; instead they have an external skeleton made up of cartilaginous plates. They have two main body segments and a huge arrangement of light-sensitive (sight) organs: two lateral eyes, two medial eyes and five on its shell! Even the tail has light-sensitive organs. They have five pairs of legs for swimming and walking and a pair of appendages useful for feeding. These are useful for flipping the animal to over if turns upside down, and they do not sting.

There are four species of horseshoe crabs, some of them found in Southeast Asia. They are usually found in the ocean bottom feeding on worms and mollusks They often come close to shore to mate and some of their mating aggregations are amazing and famous.

Horseshoe crabs are a key component of coastal ecosystems as many animals depend on their eggs as food to survive. A female can lay up to 120,000 eggs per clutch and it has been estimated that only about 10 embryos will reach adulthood. Like many other animals that need the precious coastline to survive such as marine turtles, the biggest threat to this invertebrate that has survived since before dinosaurs, is shoreline development as it limits critical space for spawning.

No Mexican Right of Survivorship