Marine animals have always been part of the spirituality of many coastal cultures and even in some cultures that aren’t – or weren’t – so close to the sea. Due to trade and travel, many old cultures had personal jewelry or decorations made out of animal parts; many murals from old cultures also have records of some marine animals. 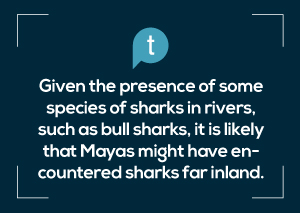 For example, shark teeth have been found in some of the earliest Mayan settlements and in villages far inland too. Also sea creatures with shark-like bodies were imprinted in ceremonial buildings and pottery. Given the presence of some species of sharks in rivers, such as bull sharks, it is likely that Mayas might have encountered sharks far inland.

But Pacific islanders are famous for including sharks (and the shark’s cousins, the mantas  – who watched Moana?) in their daily life, as they are in permanent contact with the ocean and its creatures. Their meaning and attachment to people and deities varies with the regions, although they are still an icon that inspires and deserves respect among these people.

Hawaiians believed that the family of a dead person could offer the body to the ocean, for it to become a shark that would help them improve their fishing protected from dangers, and even kill their enemies. This culture has male and female shark gods who were guardians of the oceans and were very respected.

Dolphins (which happen to be a top predator, just like sharks) are known in some of the earliest legends of Greek mythology and many cultures believed they were messengers from the gods. Although whales weren’t seen with such high regard as dolphins and sharks, they were seen as the monster of the sea, likely due to their size. The Maori in New Zealand are one of the few cultures that see whales as saviors rather than monsters.

Many other cultures and mythologies include marine animals in their legends and stories; many of them had them as gods and respected them too, even if when they hunted. Nowadays, we seem to have forgotten their beauty and importance for both culture and our fragile ecosystems. But hopefully we can use our amazing technology and big brains to, at the very least, protect them.