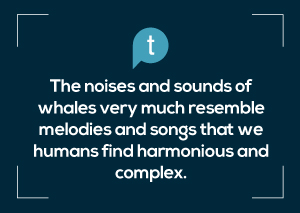 There are different types of noises and sounds that many marine mammals such as porpoises, whales and dolphins make. The noises and sounds of whales very much resemble melodies and songs that we humans find harmonious and complex, and thus we call singing.

Odontocete whales – meaning whales with teeth – like sperm whales, orcas and dolphins, use clicking sounds that are thought to be individual rhythms to communicate within each group. They have vocal repertoires known as dialects when living in pods and those sounds are unique to each pod. Their noises are also used to locate objects like prey and identify the composition, shape, size, speed and direction of an object.

However, the most famous singing comes from the Mysticete whales, which are those that have barbs instead of teeth. The humpback whale and a type of blue whale found in the Indian Ocean are famous for producing the most complex song in the animal kingdom. So complex the singing is, that experts can actually identify notes, sub-phrases and even phrases. When phrases repeat for two-four minutes, it is known as a theme, and a collection of themes turns into a song! And they can repeat sounds over and over for hours or days.

Impressively, groups of whales can be identified within each group through different songs. Humpback whales have distinct songs depending on which ocean they live in and all whales within an area will have the same song and themes that are distinct from those of other groups. They can also learn new songs, for example, the famous case of the humpback whales from the west coast of Australia that moved to the eastern coast. They had different songs, but the eastern coast whales adopted the new song brought from the west coast whales.

Whether they sing or have conversations, it is amazing to think that other creatures besides humans are capable of such a complex way of communicating. Looking at dolphin and whale societies and behavior always brings up the question of who the smart ones really are here.

An Ode to Mexico and Vallarta