Sometimes Mexicans (especially those who are not from the Yucatan Peninsula) forget that we are all part of the Caribbean. That sea of crystalline turquoise waters from the beaches of Cancun, Cozumel and the Riviera Maya reaches places filled with tourists. The Mexican Caribbean also has history, tradition, culture, and its own way of being. And, of course, it also has music! 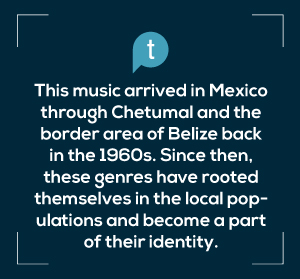 This Caribbean identity is lived daily in Chetumal, the capital of Quintana Roo and the hometown of reggae and ska bands, as well as other Caribbean genres such as punta, soca and dance hall. These genres originated in Jamaica and Trinidad and Tobago. This music arrived in Mexico through Chetumal and the border area of Belize back in the 1960s. Since then, these genres have rooted themselves in the local populations and become a part of their identity.

Following this tradition, Korto Circuito (Short Circuit) leans towards these genres, although as they themselves demonstrated in their performances, they do not want to be pigeonholed. They have proven their quality when playing other styles. This is why they have been invited to many festivals featuring reggae and ska acts, touring the interior of the country with great success and acceptance.

The group is composed of Hilario, Miguel, Santiago, Eder, Mario, Ernesto and the vocalist, Siddhartha.

Today, after more than 10 years of work and four recorded albums, Korto Circuito have become a benchmark in Caribbean music. Their great contribution is that, unlike the Chetumaleño groups of yesteryear, they compose their own music and write their own lyrics. The band states that  “Sometimes it will sound more like ska, and sometimes more like reggae. Each one contributes something until it is to everyone’s liking.”

The music of Korto Circuito is for having fun, dancing and having a good time. However, their lyrics have evolved and reflect not only their age, but their cultural identity. They speak of the discrimination that goes on in our society, the interests and concerns of young people and, of course, love and romance.

The Queen Bee of the Riviera Maya