You may have wondered if the pre-Hispanic villages celebrated the new year. This concept and calendar are of a western European tradition. The ancient nations celebrated the birth of the star that rules all others: the sun. 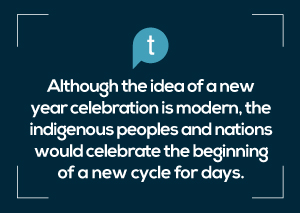 It was been well documented that the Christmas celebrations were accepted by the Mexicas and the Aztecs, as well as in the Mesoamerican villages. It was because they coincided with or were near the date of the birth of Huitzilopochtli, the god of war and the sun.

The Mesoamerican peoples were great observers and knowledgeable of the heavens and the movement of stars. Thus, the Aztecs celebrated the winter solstice, the rebirth of the sun and the birth of Huitzilopochtli during the festivals of Panquetzaliztli, where there were dances, offerings and songs.

Although the idea of a new year celebration is modern, the indigenous peoples and nations would celebrate the beginning of a new cycle for days. Seeing the celebrations, the Spaniards took advantage of these “coincidences.” The Catholic Christmas actually has its origin in Roman pagan festivals, which, in turn Rome had taken from the Egyptians, introducing the Catholic religion into them and evangelizing through the Christmas festivals. This included the nativity play, piñatas and  integrating the songs, prayers and offerings made by the Aztecs.

In this manner, a certain familiarity was created that replaced the pre-Hispanic gods with a single Christian divinity. It was accompanied by hundreds of saints and vocations of virgins.

Today, native peoples do not celebrate the new year. However, they celebrate every December 21st during the winter solstice, with special rituals for this date.

Here in Quintana Roo there are communities and people interested in reviving their Maya culture who perform these types of ceremonies. The are performed out in the open for anyone who wants to participate, giving them the respect they deserve.