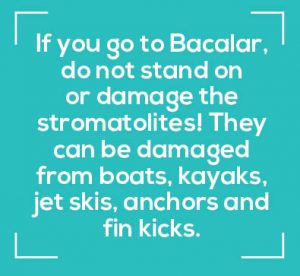 The oldest fossils on Earth are called ‘stromatolites’ which are structures formed in shallow water by the trapping, binding, and cementation of sedimentary grains by microorganisms like cyanobacteria or microbial mats. They are usually characterized by thin layers that may be flat, hummocky, or dome-shaped. Abundant sediment supply produces granular laminae whereas low sediment supply produces layers rich in organic matter.

Stromatolites are considered a visual portal into the emergence of life on Earth as they encode the role that microorganisms had in evolution and in shaping the Earth’s environment. Stromatolite-building communities were widespread on Earth, they were ecologically important as the first reefs and date back some 3.5 billion years when the environments were too hostile to support life as we know it today. Modern stromatolites were first discovered in Shark Bay, Australia in 1956, but today, these structures are nearly extinct in marine environments, living in only a few localities worldwide.

Mexico has its share of living stromatolites located in the Laguna Bacalar, Quintana Roo which can rise several meters in some areas and the bed is over 10 km long. It is thought that this bed of stromatolites may be the largest living freshwater stromatolites in the world! Bacalar is an important tourist destination, however, the unregulated and often careless use of the marine environment for tourism has shown its effects here too. Scientists have found these ancient stromatolites are damaged and have wounds from boats, kayaks, jet skis, anchors, fin kicks and even from people standing on them as if they were dead rocks! They aren’t. These impacts stop their growth and promotes invasion from other organisms, risking the health of a very important freshwater body in the country.

The closing to boat navigation in this area is an effort to save these structures so it is important to respect it as well as following the basic rules of no-impact: no touching, no standing on it, no anchoring and do treat these living structures with utmost respect as they are extremely old and quite unique.