Animal welfare laws are in place, so why is bullfighting not considered torture of sentient beings? Quintana Roo Sin Tauromaquia challenges the powers that be 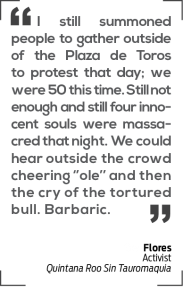 On March 17 a bullfight was held in Cancun. Although some Mexican states have banned bullfighting, Quintana Roo is not one of them. Quintana Roo Sin Tauromaquia (Quintana Roo without Bullfighting) was created with the purpose of eradicating bullfighting. Dea Flores, an advocate for the bulls, can not believe that in the 21st century we have such barbaric traditions. Mexico’s Federal Law speaks to animal welfare, however not explicitly about bullfighting, and often masked behind the curtain of “culture” states Dea. The Protection and Animal Welfare State Law also contemplates animal abuse, mistreatment, attacks, and spectacles with animals. However, it is not specific to bullfighting either, even though this law is clear when it comes to animal cruelty in Articles 33, 34 and 35, they still allow the bullfights. People are not aware of the barbaric treatment of the bulls; they are tortured before and during the match. Dea contacted the District State Representative who is working on prohibiting fights, promised the event would not go on, but it did. City Hall stopped ticket sales. However, after paying a fine, they were able to hold the event. She has worked diligently, filing appeals with judges based on the Federal Constitution forbidding the killing, mutilation, or torment of any species but to no avail. Although it is dangerous for anyone to interfere in big business, she will continue her fight for the bulls in QR. Donations for legal fees or more information contact.