The weasel has a bad reputation, and maybe it is justified. These sneaky little creatures are very charming and cute, yet they are deadly predators 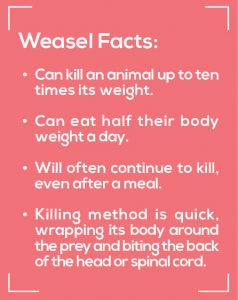 There are many sayings or quotes regarding weasels such as “he will weasel his way out of it”. Many of these expressions are based on the weasel’s reputation for escape, and not being able to cage them in because they will find a way out. They are brilliant with a big personality and fun to watch, yet they can not be trusted – like people who earn the reputation of being “a weasel.”

Although this creature is nocturnal, it can be spotted in the jungle in daylight hours. The long-tail weasel known to the Maya as sabin has a long, slim, brown body with a yellow underbelly. This species has two white lines forming a mask on their long, pointed snout.

It can kill an animal up to ten times its weight including reptiles, birds, rabbits, and rodents. Because of their metabolism, weasels eat half their body weight a day and are known to continue killing even after they had their meal. During the hunt, weasels perform an elaborate dance in front of their prey as a distraction, and in the case of rabbits, some have died of fright before they are attacked. There are no scruples in the weasel’s hunt. They will kill baby animals such as baby bats and birds in their nests. They also steal eggs. Their killing method is quick, similar to the jaguar, wrapping their body around the prey and biting the back of its head or spinal cord. The weasel also has a secret weapon, a stink bomb, similar to a skunk’s spray. They are solitary, territorial animals except during the summer mating season, although the development of the egg is delayed and the young are not born until spring typically giving birth to five to eight pups. Mom feeds the young until about five weeks when she teaches them to hunt.

The Fight to Abolish Bullfights in Quintana Roo