The vaquita, a small porpoise, only exists in the Gulf of California, Mexico.  Only 30 are remaining with little hope of survival

There are only about 30 vaquitas in existence as they suffer the consequences of illegal fishing of totoaba fish. The vaquita 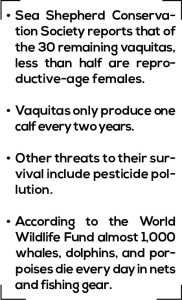 (little cow) is a rare porpoise, endemic only to Mexico’s Gulf of California, the most critically endangered cetacean in the world.  The vaquitas become entangled in illegal gillnets, unable to surface for air and drowning. The death is horrific as it struggles, causing lacerations, broken bones and if by chance escapes with ropes embedded in its body it will suffer a long, painful death. The Mexican government and the Sea Shepherd Conservation Society have teamed up to end illegal fishing and save the vaquita from extinction. Sea Shepherd has been patrolling the Gulf, removing nets and exposing the illegal fishermen. It has become a dangerous battle as the illegal fishermen publicly threaten violence towards individual conservationists and even set fire to a boat as a warning. The totoaba is also endangered, it is illegally hunted for its swim bladder, known as aquatic cocaine due to its black market value in Asia. Last May, CNN reported a bust, 39 kilos of bladders with a Hong Kong street value of $750,000 USD. Asian buyers believe the bladder promotes health and beauty.

Conservationists are pressing the Mexican government to permanently ban all gillnet fishing in the Gulf, the only area vaquitas exist. A conservation plan to create a sanctuary, capture, breed and release the vaquitas will begin this May. It is feared the remaining females will be injured or killed during the capture, but something must be done before they disappear forever.