Commonly portrayed as a terrifying creature, the truth is out: the tailless whip scorpion is harmless 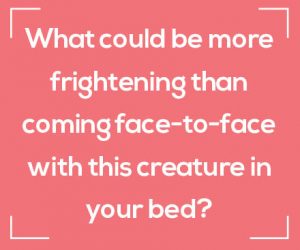 Although he looks like one of the most dangerous animals on the planet, the tailless whip scorpion does not have the ability to sting nor is it venomous. Tailless whip scorpions do not carry diseases, and they are not considered to be pests, but they are deadly predators to insects and small vertebrates.

The amblypygid (blunt rump) is a shy, nocturnal creature that is rarely seen in the daylight. It lives in tropical areas, typically hiding under rocks, tree bark or in dark caves during the day. It resembles a huge spider that has been crushed by a book, and it often makes its way into people’s homes.

Its frightening appearance comes from a prehistoric armored body and four pairs of legs. The first set are two long whip-like appendages – twice the size of its body – which flail and vibrate. They act as sensors for self-defense, finding prey and communication. The pedipalps have pincers tipped with barbs that are used to capture and crush their prey.

There is little information about the tailless whip scorpion, but scientists have found that they are affectionate during mating. Females are affectionate with their young and siblings, while the males are territorial. Two males may fight for dominance, shoving each other until one surrenders, but rarely does one die. The fight is more of an elaborate dance with waving of the antennae and claws.

Despite how they are depicted in the movies, TV shows and in local myths, the tailless whip scorpion is not dangerous. If you are able to catch one indoors, release it outside, but be aware that this docile animal moves at lightening speed when it feels threatened.

A Worldwide Day of Protest to End Dolphin Captivity