There are some occasions in life which leave an indelible mark on you. One of mine was on my first visit to Mexico. We were staying at an all-inclusive resort and had been allocated a room towards the back of the resort. This is where the well-tended lawns ended, with only a wire fence held in place by a parallel pole running across the top separating us from a tangle of green jungle. 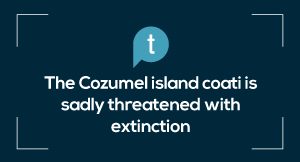 I was leaning on the balcony contemplating the peacefulness when I saw a flash of movement. A racoon-like animal had climbed its way up the wire fencing and was balancing in a well-practiced move on the pole. It was followed by 14 others in varying sizes.  I was mesmerized and stifled my squeal of delight that was trying to escape so they would not run off. I later discovered that I had been lucky enough to see a band of coatis (known as Chi’ik in Mayan) making their way home after a day of foraging. Perhaps they had also been sweet-talking hotel guests into giving them tidbits, using their cute faces and a series of chirrups, grunts and squeaks.

The white-nosed coati is the one you will see in the Riviera Maya. They come from the racoon family but can be distinguished by their longer snouts, slimmer torsos and a reddish tone to their fur. You’ll often see them holding their long, thin, banded tails up in the air, to check and make sure that everyone is there.

Since that first sighting I have seen them many times at various hotel resorts, at the entrance to the Tulum ruins and on various walks with my dog. They are nocturnal, omnivore animals with persistently curious and intelligent personalities. They forage for spiders, fruit, eggs and small animals such as lizards, birds, mice and squirrels. It is very tempting to feed them, especially if you are staying at one of the large resorts, but it is important that they forage for their own food to maintain good health and balance the local ecosystem.  Happy sightings!