Cacomixtle, from the Nahuatl language meaning half-cat, may resemble a house cat, walk and lounge like a cat, but are not related to the feline 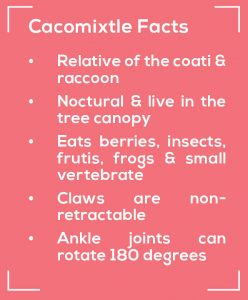 The cacomixtle also known as cacomistle are a relative of the coati and raccoon, and it would be hard to miss the family resemblance with that large black ringed tail. This agile creature is nocturnal and spends his nights in the tree canopy snacking on berries, insects, fruits, frogs and small vertebrate. They are about 39-53 cm long, plus their bushy tail, a slender body, short legs and padded feet and non-retractable claws. Their ankles are equipped with joints that turn 180 degrees providing the agility they require to maneuver through the treetops. They have long fur; ears are upright and broad with white trim, markings on their face around the eyes and snout with a pink nose. The large dark eyes stand out in contrast to the soft light face. The cacomistle inhabits the tropical forests from Mexico to Panama. They are a solitary creature and only socialize during mating season. The use tactile and scent to communicate with each other. Typically the female gives birth to one cub who is deaf and blind. It stays with its mother for about three months. Once it is weaned and learns how to survive, the cub is ready to search out a territory of its own. Normally the cacomixtle is a healthy eater, but as deforestation of their habit continues they are adapting to life in close vicinity to humans and taking on raccoon traits of surviving on trash and other unhealthy habits. They are known to live up to 23 years in captivity.

The cacomixtle is sometimes confused with the ringtailed cat also found in parts of Mexico and the United States. Although they are related there are a few differences. For example, the ringtailed cat has retractable claws and smaller ears.

Is Cancelling BPM the Answer?