This time I am not taking you to a restaurant, a bar or a viewpoint in the city, but a short flight (or long bus ride) away to the Mexican states of Sinaloa and Chihuahua. Here we can find the two ends of the famous Ferrocarril Chihuahua al Pacifico railway, more commonly known as the “El Chepe”. 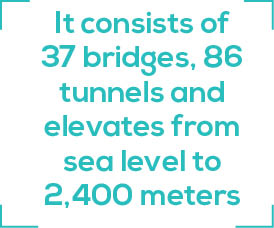 Haven’t heard of it? Perhaps the name Copper Canyon rings a bell, the mountain range which is part of the Sierra Madre. Also unknown? Don’t worry, unfortunately this part of Mexico is visited a lot less than the current hotspots, mostly because of the dangerous reputation north Mexico has in general. Of course, we should not close our eyes to the problems there, but I can say that with a little bit of preparation, you will see a stunning part of Mexico which surpasses most of the more famous spots.

Back to the railway. It was conceived in 1880,  construction began in 1900 and the project was not finished until 1961. This was because of the immense costs that came with the rugged character of the Copper Canyon. In all its glory now, it consists of 37 bridges, 86 tunnels and elevates from sea level to 2,400 meters at Divisadero.

Having flown into Los Mochis, we took a bus straight to the beautiful town of El Fuerte. The main reason for this was that it is a Pueblo Magico and it helps that the train passes there at 8:15 a.m. instead of 6:00 a.m. in Los Mochis. We set the alarm early and were almost fighting with the staff because our promised breakfast was not ready at 7 a.m. nor was the requested taxi. The situation was quickly resolved when they explained that in Los Mochis it’s one hour earlier than in Puerto Vallarta. As we were extra early, we made it to the train station and waited anxiously for its arrival. Even before the eye can see it, you can hear it, meaning only one thing: the adventure is starting.

Join me next edition to hear about the wonders of the trip, the beautiful town of Creel and the incredible nature on the way.

You've Never Heard of These Cenotes!