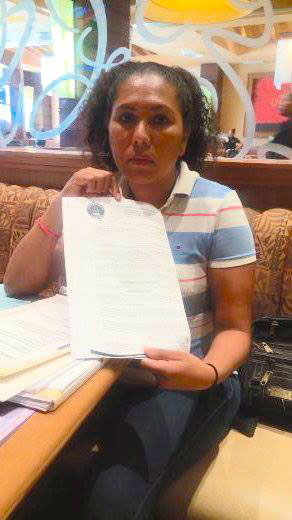 You see the signs on the highway saying “Life can change in just one second,” but do you really take the time to consider it? The lives of a local family changed in one tragic second on the morning of May 4 this year on highway 307, near Paamul.  A LIPU bus, contracted by Barcelo Maya resort, hit local cyclist Daniel Lara Mena and left him in a coma and fighting for his life.

Daniel’s wife, Sayuri Zetina Fernández, is caring for their three-year-old boy, Daniel, named after his father, in addition to fighting a company that has admitted responsibility for the accident, but is not following through on its dues to the family. Daniel’s medical expenses are more than two million pesos, none of which has been covered by the bus company or its insurance.

In addition to the emotional pain that Sayuri is experiencing watching her husband fight for his life, and despite the company’s responsibility for the accident, LIPU is attempting to have her family pay 1800 pesos for damage to their vehicle. LIPU is contracted by various hotels and schools in the area, and Sayuri wants tourists and other workers to know of their negligence.

Sayuri is also continuing the awareness program her husband started for cyclists in August 2016, when two other cyclists were hit and killed near Iberostar Playa Paraiso hotel. Her aim is for people to know about such injustice so that it can be avoided in the future.  Support the cause by sharing her story and signing the petition at Facebook.com/Justicia-para-Daniel-Lara