The United States and Mexico are brother nations. Beyond the obvious differences between our countries, we have so much in common that we should celebrate. And what better way to declare our brotherhood than a regatta connecting the two nations? I grew up in Cozumel, so I’ve been in love with these regattas for a long time. I have participated in a couple, but not the ones I’m about to review: Regata del Sol al Sol and Regata al Sol. 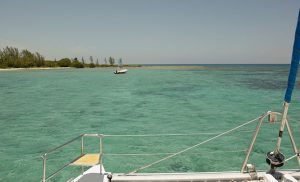 First of all, what’s a regatta? It is a boat race using the power of wind, currents and the skills of the crew. Two historic regattas are taking place soon and both begin in Florida and end at Isla Mujeres. These events have been held since 1964. Both started as a way to promote the Mexican Caribbean wonders after the Cuban Revolution. The importance of their promotion to the development of the destination is greater than most people think – they are older than Cancun’s foundation.

Regata del Sol al Sol begins on April 26 in St. Petersburg, Florida, and will continue with different activities in their sister city Isla Mujeres until May 5. This regatta is 100 miles shorter than Regata al Sol and it focuses more on the fun of racing, so it’s a great opportunity for cruising boats and aficionados to be part of the event. After the welcoming celebrations, a tour around the island will be done in what is called Regata Amigos, a favorite among locals for decades.

Regata al Sol departs from Pensacola, Florida on May 9 and will end in Isla Mujeres the following day. This is the longest (555 nautical miles) and most difficult of the two. It has to go through rougher looping currents to reach the island. This competition is for more experienced sailors, so most of the boats are racing ones. Most of the participants will reach the finish line the day after.

To know every single detail about them, visit the official websites, you can even see the satellite tracking of both races and the full list of events and participants: